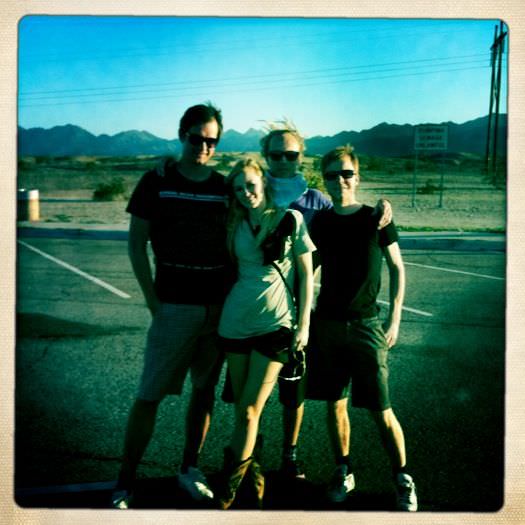 Sometimes I wish I had a band. Well I do have a band and I love them to bits, but we are not a band. They are my boys and I am their artist. They are my friends but they are not my confidants. Sometimes, when I see things like this lovely pledge by  My Bubba and Mi, I wish I had a band, where everyone were equals. Where we planned together and fought together. Where we were annoyed at critics and happy for our music together. Sometimes I feel like it’s just me, and they are just tagging along for the ride.

I’ve tried a couple of times making my band into my band. At first I gave them a name, The Tallboys, so that they would feel like a band and not just musicians backing up a singer/songwriter. It didn’t really work, but it doesn’t matter because now, 6 years down the road, they’re still with me and I don’t think any of them feel like just a back up musician anymore. It’s probably for the best, as I can be quite bossy and stubborn and tend to decide everything but sometimes I feel I’m struggling all alone. Like last year when we were on tour and there were just so many things that were going wrong, and I felt like I couldn’t tell them and had to pretend that everything was alright so we wouldn’t all be depressed and worried.

This year my guys are showing their skills as more than musicians playing behind me. They are each producing an EP for me in my 4 piece L.O.V.E saga. I wonder if they will feel as protective about their EPs as I do when I release an album. I wonder if they know just how much I appreciate and love them. Even if they’ll never be my band.

Glad we got two days of summer and camping before