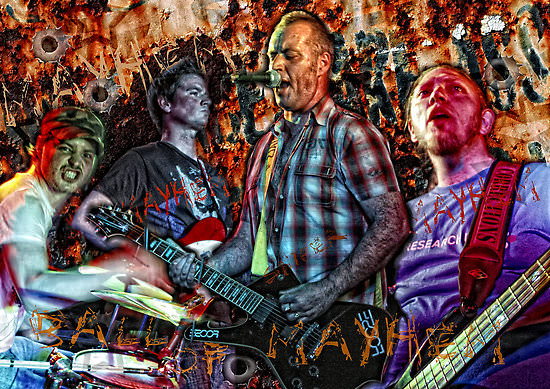 H.A.T.E will consist of 4 EPs, just like L.O.V.E. They will even contain the same songs. So what’s the difference? Well H.A.T.E is the rock version of L.O.V.E. Four rock bands will make one EP each. First out is British band Ball of Mayhem. I managed to get a little interview with Dave Chrisp from the band, and here’s what he’s got to say about their upcoming EP “H”.

Hi David! You’re part of the rock band Ball of Mayhem that is about to release the first EP “H” in the H.A.T.E quadrology. We’re so excited for the release! Tell us a little bit about your band!
Hi.Well Ball Of Mayhem started about ten years ago then under the name Slugfist by my brother Terry (Lead vocals, rhythem guitar) and Stephen (Bass). Since then it has had a few line up changes. I joined about three years ago and our Drummer Jack and Lead guitarist Zac joined just last year. We are all from and are based in the North East of England. Our name kind of represents the sheer variety in our sound, while all of our songs are what you would call heavy there is a big mix of catchy power metal songs with soaring vocal harmonies to out and out stomping metal with monster riffs! We like to keep our sets so you just dont know what is coming next.

How did you get involved in the project?
Well I’d like to say it was something rock and roll like we got talking backstage at Glastonbury or something but it was actually through Facebook. I saw Sofia’s post asking for Metal bands to be involved in a project so I replied to that and here we are!

Sofia’s music is quite different from Ball of Mayhem’s. Have you listened to Sofia’s music before and what was it like to interpret the songs?
Yeah I was familiar with Sofia’s music for a long time before this project. I’m a fan of Bernard Butler and first heard of Sofia after they did “It’s just love” together and have always kept up with what Sofia has been doing.

It was a lot of fun working on the songs, we got to work as soon as we received her EP. Me and Tez (Terry)  just sat in his conservatory listening to it over a few beers and straightaway had a good idea as to what form each song would take. Once we started arranging them it was pretty obvious that they were going to work really well as metal/rock songs.
Usually it’s the other way around, singer/songwriters that turn rock songs into sweet mellow versions. Do you think it’s harder turning an acoustic song into a rock song or why do you think that is?
I dont think it is, in a way I think it gave us more scope for arrangements as metal/rock is so broad and there are so many different styles of it that can be applied. We were able to add to the basic structure of the songs while not making them unrecognizable from the originals. It would of course be easy just to speed everything up, put loads of guiars on and scream all the way through but we wanted to keep them as “Proper songs” so we went for that big metal anthem sound on all of them.  I think if you are going to do a cover you really need to put your own stamp on it otherwise what is the point?

How is this EP different from what you usually play?
While we do have catchy songs in our set I would say that these are generally more melodic than what would would normally do. We would perhaps keep a catchy melody/hook for a chorus or a break but these songs have that throughout. The subject matter is not something we would normally sing about either! I dont think any of us would dare turn up to a practice and say “Hey I’ve wrote this really heartfelt song about a love lost that I want us to try…..”

Which is your favorite of the 4 songs and why?
Tough question as personally I have favourite bits of them all. Sofia’s versions I’d say Nothing quite so gentle, it just sounds like a single and is a great vocal, great melody, this was probably the easiest to cover.

Our versions I’d have to say Bittersweet bliss, the chorus is a really nice lift after the almost spoken verses, this one really rips along. But the intro to Everyones favourite concubine is a real band favourite, when it kicks in it is just huge with Jacks thumping doubles on the drums with the pounding guitars yet still has that nice little riff that is being picked on the original. We actually had an idea for a song that we never used that started like this and it just fitted perfect when we tried it out. We’re planning on playing this live in a couple of weeks as a set closer and we’ve already had people pop in at practice saying how awesome it sounds.

Listen to a preview here: Bittersweet Bliss version by Ball of Mayhem

What’s next for Ball of Mayhem?
We’ve just came first in a Battle Of The Bands competition which was great for us, we are starting to get more widespread gigs now which we hope continues as we are starting to get a nice little fanbase now. We’re hitting the studio to record our next EP next month which we plan to release later this year. We have some really big songs that we cant wait to get recorded.

After that who knows, maybe take over Sweden?!, I’ve heard it’s nice there.

You can listen to Ball of Mayhem here: www.myspace.com/ballofmayhem

So. This is the last video to be posted, and you have now heard all 12 songs from my new album “Jonestown”.

Last but not least I’m happy to present Maia Hirasawa. Maia received a P3 Guld award for newcomer of the year when she released her album, and I had to go all the way to Gothenburg to record this song with her. I caught her in the middle of her changing apartments but she was as happy and carefree as her own music is, and she also brought that to the last song of this series of videos, “Something Good”.

About Maia:
Maia Hirasawa has sung in a million different bands we most recently recognize her as the backing vocalist and multi instrumentalist in Hello Saferide, but she also played support to HS the entire of last year and sold every copy of her demo that she had the energy to burn on her Macbook. She won the Roland/Sami price for the best un-signed act of 2006. She’s in fact a skilled jazz singer, has a background as a Brit-popper and listens to Loney Dear and Rufus Wainright, but not to Regina Spektor, simply cause everyone says that they bear resemblance. She is half Japanese. “Though I’m Just Me”, is the name of Maia Hirasawa’s solo debut album.

Stay tuned for the competition, which will begin soon, where you can win signed albums!

The greatest thing about doing these videos is that so many fab artists from so man different genres has participated, doing their own thing with my songs, adding their own touch!

Emma Nylén, singer in the band Paris and her own electro/disco project Emmon joined me on my first “Jonestown” single “As summers pass”. Emma reminds me of Modesty Blaise with her jet black hair and beautiful big eyes. If Modesty could sing, I’m sure she’d be thrilled if she sounded like Emma.

The 15th of September, I’m releasing my third album “Jonestown” in the U.S and later in Japan. To give you a preview of the songs from the album I have gathered 12 of my favorite Swedish artists who will each do one song from the album live with me on tape.

You will get the opportunity to meet well known artists as well as up and coming new stars, and when the videos are all released we’ll turn it into a competition where you can win signed albums of “Jonestown”.

About Emmon:
Emmon is the solo project of Emma Nylén. She is also one of the member of the Swedish pop-band Paris. The Emmon-project was started in 2001 as an experimental music vs. art project under her art studies at Konstfack University Collage of fine Art in Stockholm. Emmon’s computer based music lies on the border between pop, synth, electro and disco music. Its based on her vocal resources with a lot of attitude and melodic pop songs. She also working as a DJ and doing remixes for other bands and artists. For example: The Knife, Melody Club, Homy, Soviac, Postplay

Having only two videos left to release, its sort of starting to feel a bit sad it’s coming to an end. But how can one be sad when one hears the exquisite voice of Frida Öhrn from the band Oh Laura?

Oh Laura gained their fame when having one of their wonderful songs “Release me” in a Saab commercial and it’s hard not to be taken by Frida, so naturally I asked her to be a part of my live videos.

About Oh Laura and Frida Öhrn:
Oh Laura, formerly known as Laura, is a Swedish indie pop group from Stockholm. The band’s name comes from one of the heroines of the television series Twin Peaks, Laura Palmer. The group came into existence as a project of 2 friends from school, Jocke and Jorgen. They were both born and raised in Sweden, they’re both very talented musicians and composers. Jocke mainly composes music, Jorgen writes most of the lyrics. They met Frida when Jocke was on the concert with his sister. Frida’s voice made on him such an unusual impression that he immediately proposed her a cooperation. Not much later Frida called her 2 friends, a bassist, Rikard and a drummer, Magnus and that’s how Oh Laura was born! Oh Laura is also known from having one of their wonderful songs “Release me” in a Saab commercial.

So I’ve been busy with planning the US release of “Jonestown”. And as I’m releasing three new videos each week I’ll try to make it up to Sara Rumar for not posting her earlier by doing it now!

Sara and I met when we were both summer temps at one of Sweden’s largest newspapers. We discovered our common interest for music and soon gained the nickname “The Glittertwins” in the office. Sara has since released 2 cool pop albums in Sweden and Germany.

Guest number 2 is country singer Kristina Westin.
I first heard of Kristina Westin from my husband’s co-worker who plays the guitar in her band. We went to a few of their gigs and were impressed by Kristinas husky voice and talented songwriting. Kristina who has only released an EP yet will release her debut album later this year – and we’re looking forward to it!

Check out her stuff here: www.myspace.com/kristinawestin