I’m proud to say that me and Sophie Rimheden is somewhat of a power duo. We wrote our first Christmas song together, a disco dance hit called “Xmas on the Dancefloor” and Sophie has made several remixes of my songs. She’s known as Sweden’s electronica Princess and she’s just released a new Christmas single that she’s sharing with you in today’s episode of Sofia Talvik’s Xmas Calendar! You can download Sophie Rimheden’s Christmas single, called “Xmas time” and is part of the compilation “Jul på Techno” here.

If you’re in Stockholm you can also swing by the release party for “Jul på Techno” today at Debaser Medis, Coctailbaren 7-9 pm.

Hey guys
Don’t miss the festivals Hoodsfred and Re:publik (both in Stockholm) this upcoming weekend. Friday me and my lovely Tallboys are playing at the big stage at Hoodsfred in Kista at 7.40pm (kl 19.40). We’ll bring you songs from the new(ish) album Street of Dreams and it’s for free so don’t miss it!

Saturday I’ll do a very special gig with Sophie Rimheden as most of of you know as Sweden’s own electronica princess! We’ll be doing a very clubby, discoey kind of performance for all of you who want to dance and party. This is the first time we’ll perform live together and to get a hint of what you might get to hear, check out our myspace site www.myspace.com/sofiasophie
We’re playing in Allhuset on Frescati at 11pm (kl 23) and it’s a free festival. 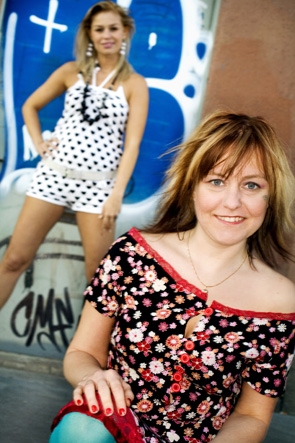 Well, we are expecting to get the album in stock around Christmas so it does start to feel a bit magical. But if I thought it was hard work making the album, I suppose I had no idea all these documents were coming up. I've been filling out form after form and numbers and codes 'til I tought my brain was going to explode. But soon it's done and the one thing that is cheering me up the most at the moment is our little bonus project. I wasn't going to tell you just yet but I can't stay quiet any longer haha. We're releasing the entire album in a remixed version for free on sofiatalvik.com. 13 talanted artists from Sweden, England and Japan are each making a remix of one of the songs from the album. The result will be a dancy, cool album, so very different from the original.

A couple of the remixes has already started to drop in via mail and today's treasure is Sweden's own electronica queen Sophie Rimheden's remix of my song Mother's way, Father's way. Me and Sophie had a bit of a disco thing going on last year and wrote a song called Xmas on the Dancefloor. You can listen to it on our myspace site. I think Sophie is a brilliant artist so it was no wonder I wanted to work with her again when I got the chance.

Hope you like the new site by the way, it's still a bit under construction but soon we'll have all the pieces put together.