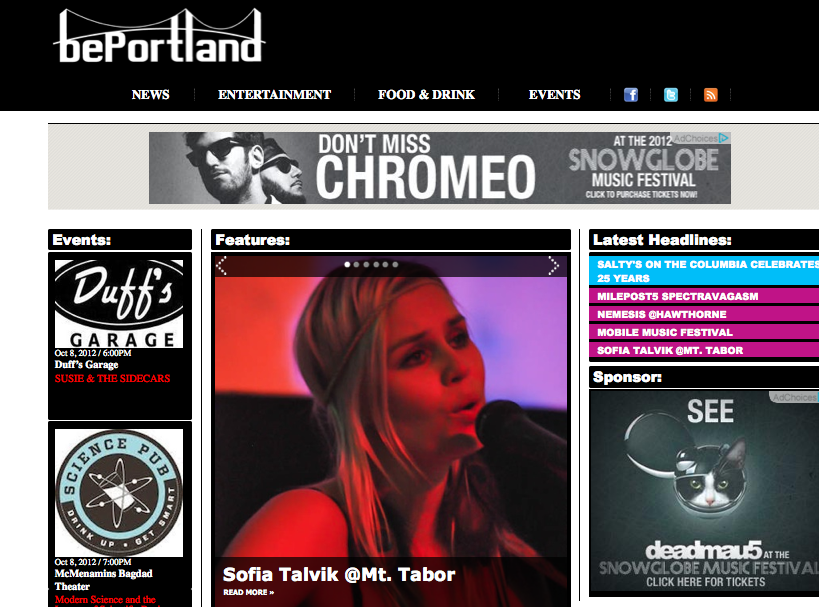 This Saturday I had a lovely show at the Mt Tabor Theatre in Portland with Gallon House and Jacob Miller and the Bridge City Crooners. Entertainment site BePortland.com was there and covered the show. You can read about it here and check out their awesome pictures!

Sweet words from Left of the dial:

While I was running around like an eight-year-old in a Toys R Us in Grant Park, Chicago this past August at Lollapalooza, ambience was the farthest musical feature from my mind. I wanted Bloc Party. I wanted the Go! Team. I wanted to dance and shout and make a scene.

But, contrary to my initial plans, the first morning of the show had me swaying in front of the Citi stage to the quiet croon of Sofia Talvik, tapping my foot lightly and thinking that maybe pretty love songs weren’t so bad after all.

And this soft-spoken Swede did nothing to dissuade me from this thought with her August release Jonestown.

I don’t know much about lady singers other than Collegian favorite Hop Along, Queen Ansleis, but Talvik’s breed of syrupy-sweet music of the folk-pop persuasion is something I can feel myself getting behind with every listen. Never riled, she carries through this album with a collected serenity usually reserved for librarians and Zen Masters.

“As summers pass” sets off the mood of Jonestown not with a jolt, but with the soft trickle of Talkvik’s lyrics. They don’t make you perk up in surprise, but rather creep up on you. You relax, you close your eyes, and then you realize that it’s the music that’s loosening up your shoulders.

One song flows to the next without much ceremony, but Talvik does so in a way that keeps the music-goer tuned in. You won’t be surprised with what’s coming up next, but you don’t have to wait during the two seconds of transition in concern that you aren’t going to like what you hear. If you make it to “My James Dean”,  youâ’ll make it to “Prove Me Wrong” without noticing the passing of time between.

None of her songs pack a punch, but that’s not what Jonestown was created to do. From the horns in “Something Good” to the lilting piano in “Burning Fields”, Talvik reels you in, plugs her warm, somber music straight into your frigid heart and turns up the heat. Listeners emerge from Jonestown as if waking up from a trance, mildly disoriented but happy with the fuzzy memory of what just happened.

Though none of her songs break too much from the placid bubble she’s created around this album, “Clown” is the most rogue of the pack. With jumpy percussion and light trombone blats, Talvik takes on a more risque demeanor as she describes a non-existent circus and chastises the man her man about acting like a clown. Well spoken, Talvik.

My only qualm with Jonestown is the eventual monotony of a dozen mellow tracks. This drag comes with any album that keeps the same place through its duration. Sometimes I’m ready throw in the towel and switch on some dance tunes halfway through the Cd. I’m not normally one for love songs, so this album can really slide me out of my comfort zone if I don’t put it on with an open mind.

Overall, Talvik’s delicate harmonics and light instrumentation keep a listener tuned in to Jonestown with a subtle interest. You’re so at ease by the time closer “Jonestown” fades out that it will take a minute or two before you even notice the album is finished. Jonestown is an album perfect for naps, writing papers, being in love and unwinding after a long day.