If you’ve followed me on Facebook before you know that I enjoy cooking (understatement!) and like to post pictures of whatever food I make. In the RV it’s a little bit more challenging to go on any culinary adventures. I try my best but work space is limited as well as cupboard space and having lived in this thing for about two months I’m not quite stocked up on spices and tools either. We’re also on a budget whereas at home we almost never got around to eating those leftovers.

But as someone said – musicians tend to find each other everywhere, so it seems foodies do too. On this tour so far we’ve been invited for some lovely meals, both in people’s homes and to restaurants – something that we starving artists always appreciate. In Tampa we happened to meet the chef/ owners of the hot new restaurant The Refinery which has been written about in fancy publications such as Condé Nast Traveller. They invited us for dinner, the day after my gig at the great beer bar The Independent, and by chance their neighbor had dropped off a couple of pheasants which they prepared for us.

In Birmingham, AL I visited the radio show Oh Brother and the owner of MIX, a very nice bakery/restaurant in downtown wrote on my facebook wall and invited us for lunch. We had some great gumbo but was most impressed by the gorgeous sour dough breads that they had for sale. Good bread is something that’s very hard to find here in the US I think. I might be spoiled though because back in Sweden the bakery of the Swedish champion in bread baking is just next doors to my apartment.

When lunching at MIX the chef and co-owner Phil Dupont came out to say hi and all of a sudden we were invited to his upscale restaurant Cafe Dupont for dinner. We were totally blown away by the beauty and atmosphere at Cafe Dupont but even more so by the food. My favorite was the tuna starter (I’m a sucker for good tuna and Asian flavors) and Jonas favorite was the veal starter. And don’t get me started on the Cosmo!!!

In New Orleans we’ve been taken out to experience the best of the city by our newfound friend photographer Marc Pagani, who not only showed us the Hi Ho Lounge, made us the strongest drink ever but also took us for a culinary tour at La Petite Grocery on Magazine street. Food and ambience was great and I’d go back anytime if I could.

We ended our last night in NOLA with a visit to Lola’s, an unpretentious little Spanish restaurant in Mid-city which was also very enjoyable. We really had our mind set on the authentic kitchen of Liuzza’s by the track but unfortunately they were closed on Sunday’s. Good thing we already had the catfish po-boys and beignets the days before.

But as enjoyable restaurants are the most satisfying is a really good meal you’ve cooked yourself. I never thought I’d do the Swedish cabbage rolls in the RV (the best kind of comfort food) but that’s what I did the other day. And people who think you have to live off microwave meals and eat off paper plates are either too lazy to use their kitchen or just not creative enough. I even made a quick version of beef teriyaki the other day. Or how about some Vietnamese salad wraps?

If I’d just have some more space and would be able to find fresh yeast I’d be baking too. Actually it’s probably just the lack of yeast that stops me 😉 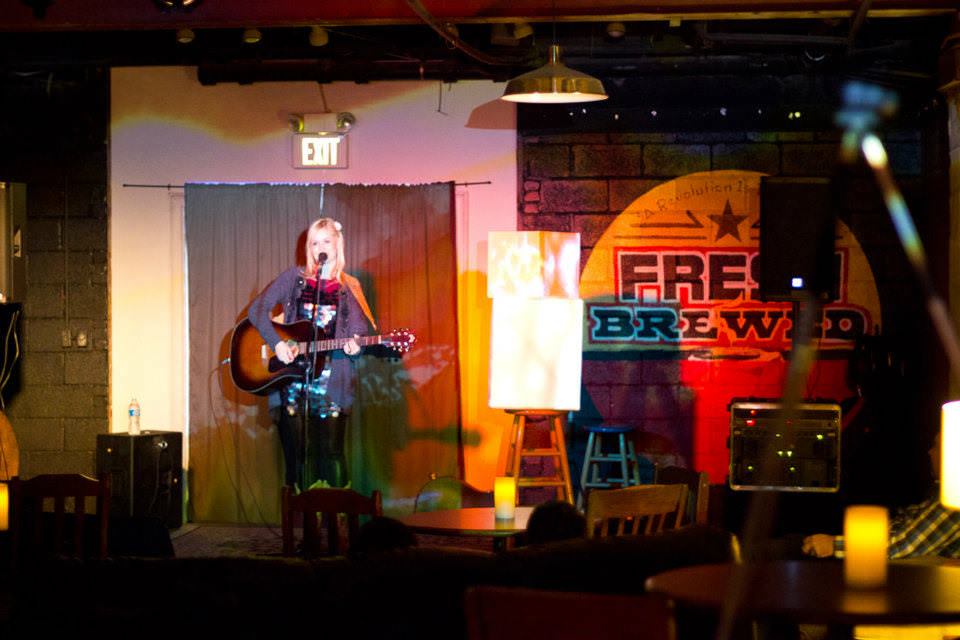 Last night I played at the Fresh Brewed Coffee House in Myrtle Beach, SC and when they heard that I had a few days off they kindly invited me to do another show on Monday January 9th. So around 5.30pm I’ll play some songs in the front room.

If you can’t catch me in Myrtle Beach you might want to try South Port, NC where I’m playing January 11th at the Playhouse 211.

Check out info about all my upcoming gigs here: https://sofiatalvik.com/gigs

If you decide this is something you would like to do; check out my concert schedule to see when your state is listed and then go here to contact me.

Here’s some pics from the house concert in Hartsville.

Sweet words from Left of the dial:

While I was running around like an eight-year-old in a Toys R Us in Grant Park, Chicago this past August at Lollapalooza, ambience was the farthest musical feature from my mind. I wanted Bloc Party. I wanted the Go! Team. I wanted to dance and shout and make a scene.

But, contrary to my initial plans, the first morning of the show had me swaying in front of the Citi stage to the quiet croon of Sofia Talvik, tapping my foot lightly and thinking that maybe pretty love songs weren’t so bad after all.

And this soft-spoken Swede did nothing to dissuade me from this thought with her August release Jonestown.

I don’t know much about lady singers other than Collegian favorite Hop Along, Queen Ansleis, but Talvik’s breed of syrupy-sweet music of the folk-pop persuasion is something I can feel myself getting behind with every listen. Never riled, she carries through this album with a collected serenity usually reserved for librarians and Zen Masters.

“As summers pass” sets off the mood of Jonestown not with a jolt, but with the soft trickle of Talkvik’s lyrics. They don’t make you perk up in surprise, but rather creep up on you. You relax, you close your eyes, and then you realize that it’s the music that’s loosening up your shoulders.

One song flows to the next without much ceremony, but Talvik does so in a way that keeps the music-goer tuned in. You won’t be surprised with what’s coming up next, but you don’t have to wait during the two seconds of transition in concern that you aren’t going to like what you hear. If you make it to “My James Dean”,  youâ’ll make it to “Prove Me Wrong” without noticing the passing of time between.

None of her songs pack a punch, but that’s not what Jonestown was created to do. From the horns in “Something Good” to the lilting piano in “Burning Fields”, Talvik reels you in, plugs her warm, somber music straight into your frigid heart and turns up the heat. Listeners emerge from Jonestown as if waking up from a trance, mildly disoriented but happy with the fuzzy memory of what just happened.

Though none of her songs break too much from the placid bubble she’s created around this album, “Clown” is the most rogue of the pack. With jumpy percussion and light trombone blats, Talvik takes on a more risque demeanor as she describes a non-existent circus and chastises the man her man about acting like a clown. Well spoken, Talvik.

My only qualm with Jonestown is the eventual monotony of a dozen mellow tracks. This drag comes with any album that keeps the same place through its duration. Sometimes I’m ready throw in the towel and switch on some dance tunes halfway through the Cd. I’m not normally one for love songs, so this album can really slide me out of my comfort zone if I don’t put it on with an open mind.

Overall, Talvik’s delicate harmonics and light instrumentation keep a listener tuned in to Jonestown with a subtle interest. You’re so at ease by the time closer “Jonestown” fades out that it will take a minute or two before you even notice the album is finished. Jonestown is an album perfect for naps, writing papers, being in love and unwinding after a long day.