I played at the dinner that A&R Worldwide and the Swedish Consulate held yesterday. (A big thank you to the organizers for having me, it was a great honour!) It was nothing like I had expected. I thought it was going to be more of a networking thing, where people would mingle and talk while I stood in a corner singing. Instead there were a hundred seated people, totally quiet, just looking at me. I got so nervous I thought my knees would shake me off the planet! But I got through it and then Kristin, Peter and Warren took me to the Troubador.
I’m going home today so I’m having my last american sandwich…

…which is basically a sandwich monster. I bought one yeaterday, so this is actually the left over half of that one. I can’t imagine why they want to overstuff their sandwiches like this.

I’m actually so glad I’m going home today. First of all since I get to go home to Jonas, second because my ears hurt from all the english. It gets kind of intense after a while, and I think the phrases I’ve used most during these two weeks have been:
“That’s cool”
“That’s awsome”
“That’s a good thing”

and of course “Thank you so much” which I am also saying now to you guys for following my tour blog. I hope you got to see one of my showcases in Austin, where I had my lovely band with me (I missed you guys so much yesterday). Good by America! 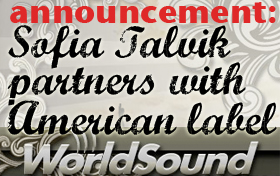 Sofia did a splendid job at SXSW, knocked out the audience at no less than 6 showcases and started a collaboration with American label Worldsound.

– It’s a collaboration that suits the way I work, says Sofia, we have a partner deal so I won’t be kicking off my shoes and wait for anyone else to take charge. My goal has always been to carry a strong business and be able to make my own choices. With Worldsound I have finally found a US label that is on the same page as me.

Worldsound describes Sofia as “The best Swedish discovery since Ikea”.

Worldsound will represent Sofia and Makaki Music worldwide, outside of Sweden, starting in March 2009.

So I’ve spent my first night here in LA. Me and Warren met up with his lovely friend Kristin and she took us to the Hotel Café where a bunch of people played live. It was awsome but I was a partypooper and wanted to get some sleep. Anyway, when we were about to leave I spotted Aqualung in the audience. I managed to work up some nerves to speak to him, and he seemed to think I was some annoying fan (which I am). But there were like a couple of showcases at SXSW that I didn’t want to miss and one of them was Aqualung’s. I only managed to stay for a few songs but he was really good. I joked to my cellist Christian that Aqualung could be his gay little brother (I don’t even know if he’s gay, and if he would read this he would probably hate me) they do look a little bit alike.. just check this out:

We’ve arrived in sunny Austin. The weather here was just gorgeous yesterday, 28 C and sunny. We spent the day shopping away at highland mall, I got some awsome shoes at Forever 21 for just 6 bucks and then we went to check out my friend Angie Mattson’s showcase.

My throat has gotten worse, I have a persistant cough, pretty typically me. I get ill really easily and when I do it’s always with a sore throat and a cough. Joakim’s sister recommended Dayquil, so I got a big pack on a local drugstore. Jonas has got a cold sore and got some kind of ointment that felt like dentist anaesthetic, numbing his entire lip. I don’t think I’ll try that before the show tonight.

Then we went to a hat store and tried on hats. I actually bought a cowboy hat, but not the one in the picture. I wonder if I will ever wear it out of Texas… 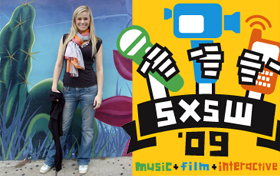 Fresh from a powerful performance at 2008’s Lollapalooza festival, Sweden’s Sofia Talvik is now poised to conquer the States with the release of her devastatingly beautiful third album. It’s a record of staggering elegance, with the faintest trace of Scandinavian twee and youthful exuberance. (Chris R, CD Baby)

If you are working in the music industry and would like to schedule a meeting or a an interview, please contact:
Jonas Westin, CEO Makaki Music – email
Laura Hamlett, Big Fat Cat PR – email