When William called me on his way over to shoot this video, he asked me if he should bring a red clown’s nose. As it turned out he didn’t, but it might have been great fun, and the fact that he thought of this says a lot about him as an artist and performer. You could easily say William isn’t afraid of making anything a show. This is why I’m so happy to announce him as one of this week’s guest artist.

William Crafoord is an old time idol of mine. When I was about 12 William had a Swedish rap band called “Just D“. It’s safe to say I had all their albums and was somewhat obsessed 😉 Anyway, William has come a long way since then and has released several albums, both as part of the group “Just D” and as a solo artist.
Lately William has put together several musical and theatrical shows, with well known artists such as Salem al Fakir as well as with his dog Django (who also participates in this video). Here you’ll see him singing my song “Clown” from my upcoming album “Jonestown” with me. Enjoy! 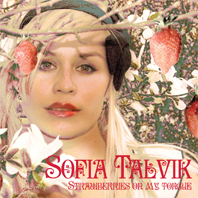 Summer is here!! And so is my new summer single “Strawberries on my tongue”. This first week all of you who have twitter gets the new single for free before everyone else, with just one tweet. When you add your twitter name and password here, you get a download link to the single, and your twitter account automatically sends out a message on your twitter flow that you downloaded the single. (no information of names and passwords is saved so don’t worry). This is the way you pay for the single, by simply telling your friends about it. Neat huh!

The single is mixed by renowned producer Magnus Frykberg and the B-side (YES! You get two versions of this baby) is a live recording with a guest performance from world musician Steafan Hannigan who has worked with Björk and Depeche Mode to mention a few.

So, I’m back in cold, cold Sweden after a short but lovely time in Austin, TX. where I performed in the famecast finals.
The video from the finals will be published on the famecast website on Thursday, and you’ll be able to vote every day for a week after that. If you haven’t registered you’ll have to do that first.

Here’s som pics from my time in Austin. I hope I get to go back soon again!

Good news!Â I’ve made it to theÂ Top10 in the Singer/Songwriter competition on famecast.com, and if I make to Top5 I get to go to Austin, Texas to perform live in the finals.
You can help me by voting on my video on famecast.com. Just follow the instructions below! And don’t forget to tell all your friends about it!

I recently joined up with the site friaburma.nu where you easily can donate money through a text message (sms) to help the struggle for freedom in Burma.

The result is a video of me performing one of the songs from my upcoming album live in a studio while being filmed. The song is called Arms and Armour (lyrics available on www.myspace.com/sofiatalvik ) and you can now watch the live video on friaburma.nu or directly here below: