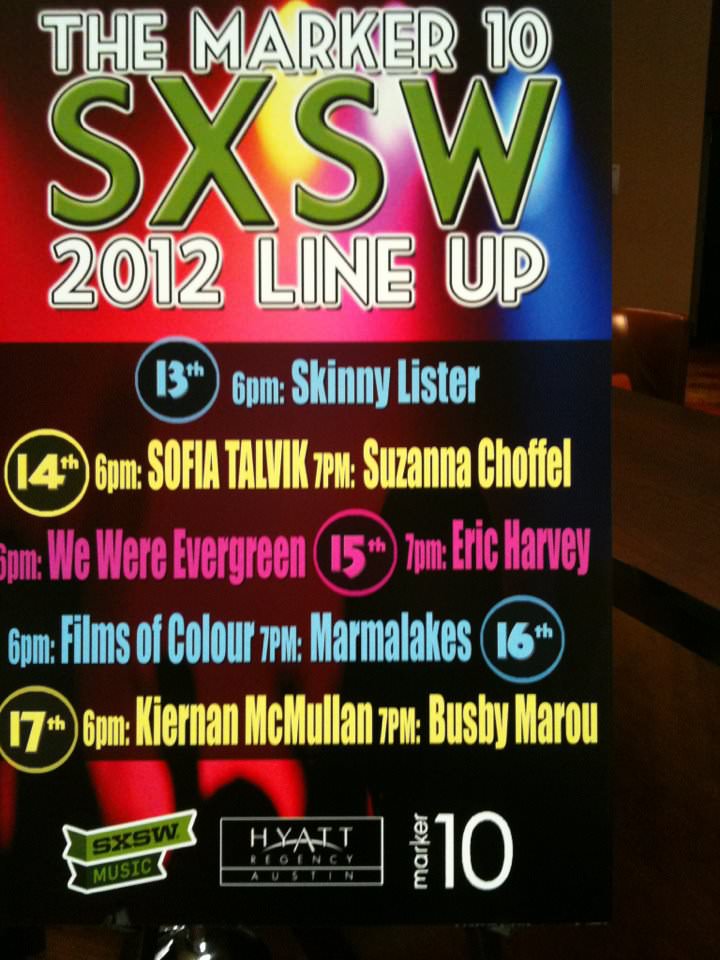 I missed out on my gig at the Super Happy Funland SXSW after party in Houston this week as my tour bus broke down in Austin, but Space City Rock blog did a really great write up for the gig. I hope people found out in time that I couldn’t make it. I’m playing March 25th at Dun Bros Coffee in Katy, TX instead if you want to come and see my show.

[quote] I’ll admit to being somewhat biased towards Swedish musicians, these days; few other countries crank out thatmany crystalline-perfect pop songwriters, year after year and decade after decade (think Abba, Peter Bjorn and John, Miike Snow, The Cardigans, Jens Lekman, Jose Gonzalez, etc., not to mention less-pop folks like The Knife or The Hives).

And happily, Swede Sofia Talvik doesn’t shatter my illusions, delivering an impeccably-crafted set of songs that draws on gentle country-folk and fey indie-pop, somewhere in between the mysterious beauty of Eisley (or maybe Tori Amos) and the floating folkiness of Hem. It’s good stuff. [/quote]

If you’ve followed me on Facebook before you know that I enjoy cooking (understatement!) and like to post pictures of whatever food I make. In the RV it’s a little bit more challenging to go on any culinary adventures. I try my best but work space is limited as well as cupboard space and having lived in this thing for about two months I’m not quite stocked up on spices and tools either. We’re also on a budget whereas at home we almost never got around to eating those leftovers.

But as someone said – musicians tend to find each other everywhere, so it seems foodies do too. On this tour so far we’ve been invited for some lovely meals, both in people’s homes and to restaurants – something that we starving artists always appreciate. In Tampa we happened to meet the chef/ owners of the hot new restaurant The Refinery which has been written about in fancy publications such as Condé Nast Traveller. They invited us for dinner, the day after my gig at the great beer bar The Independent, and by chance their neighbor had dropped off a couple of pheasants which they prepared for us.

In Birmingham, AL I visited the radio show Oh Brother and the owner of MIX, a very nice bakery/restaurant in downtown wrote on my facebook wall and invited us for lunch. We had some great gumbo but was most impressed by the gorgeous sour dough breads that they had for sale. Good bread is something that’s very hard to find here in the US I think. I might be spoiled though because back in Sweden the bakery of the Swedish champion in bread baking is just next doors to my apartment.

When lunching at MIX the chef and co-owner Phil Dupont came out to say hi and all of a sudden we were invited to his upscale restaurant Cafe Dupont for dinner. We were totally blown away by the beauty and atmosphere at Cafe Dupont but even more so by the food. My favorite was the tuna starter (I’m a sucker for good tuna and Asian flavors) and Jonas favorite was the veal starter. And don’t get me started on the Cosmo!!!

In New Orleans we’ve been taken out to experience the best of the city by our newfound friend photographer Marc Pagani, who not only showed us the Hi Ho Lounge, made us the strongest drink ever but also took us for a culinary tour at La Petite Grocery on Magazine street. Food and ambience was great and I’d go back anytime if I could.

We ended our last night in NOLA with a visit to Lola’s, an unpretentious little Spanish restaurant in Mid-city which was also very enjoyable. We really had our mind set on the authentic kitchen of Liuzza’s by the track but unfortunately they were closed on Sunday’s. Good thing we already had the catfish po-boys and beignets the days before.

But as enjoyable restaurants are the most satisfying is a really good meal you’ve cooked yourself. I never thought I’d do the Swedish cabbage rolls in the RV (the best kind of comfort food) but that’s what I did the other day. And people who think you have to live off microwave meals and eat off paper plates are either too lazy to use their kitchen or just not creative enough. I even made a quick version of beef teriyaki the other day. Or how about some Vietnamese salad wraps?

If I’d just have some more space and would be able to find fresh yeast I’d be baking too. Actually it’s probably just the lack of yeast that stops me 😉 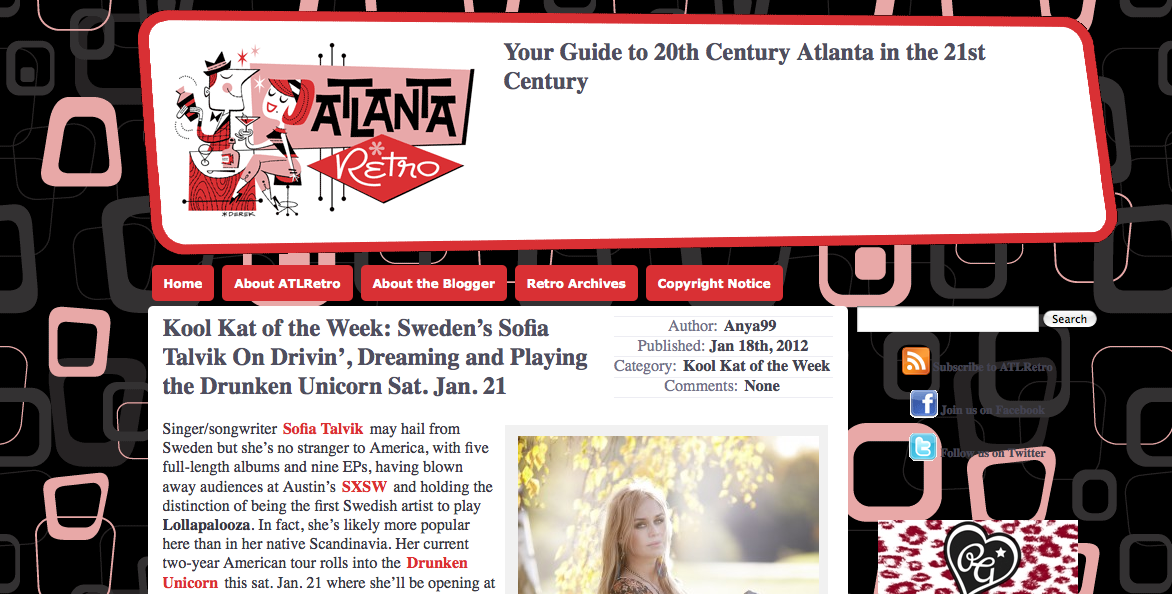 Listening to her music, an otherworldly edge, surprising twists and powerful, haunting vocals make her much more than just another pretty folk-pop-acoustic performer. In other words, in Scandinavian music terms that Americans can understand, she’s no ABBA retread and not quite the enigmatic eccentric of Bjork, but carving her own unique and welcome niche in the music world.

Atlanta Retro writes about my music, my upcoming show at the Drunken Unicorn and does an interview as well. Read it all here! 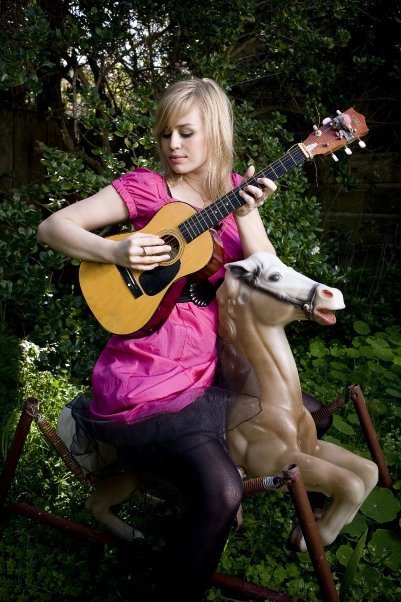 I know it’s a kinda weird headline, but this week there has been a lot of parties. Monday night me and the band celebrated the release of “Florida” at the beautiful “Södra Teatern” in Stockholm. We had a great night, the place was packed and we played 8 of the songs from the new album. No one asked me if I could play any ABBA so that was a perk!

Yesterday I attended my friend Dusty Monroe‘s release party for his debut album. Dusty himself looked a bit like Robert Smith on stage with wild makeup and tousled hair. During the gig ballet dancers, robots and a pregnant opera singer in a white sorcerers dress appeared on stage. Half my band who also play with Dusty were all made up in greek helmets and makeup. I was bummed they didn’t wear the same outfit to our release.. or not haha. It was a great gig. Dusty is really a live artist, but check out his album if you like electronica mixed with pop and surf.

I’m off to Gothenburg today to play at a radio show tomorrow and see my parents. Mum and dad have just been backpacking in India. They’re rather adventurous for a retired couple. Me and Jonas is actually alone in the first class carriage, and we just got stuck south of Stockholm due to some problems with the tracks. Good thing I’m in first class where there’s free wifi so I can do some blogging.